It’s good to be young and successful in the NFL — until a player is not paid what he’s actually worth to his team.

From draft class of 2014 standouts who would like their big cash now to the immediate big bargains from 2016, here are 15 guys providing the biggest bang for moderate bucks going into the season. In other words, “Pay the man!” NFL Games Today 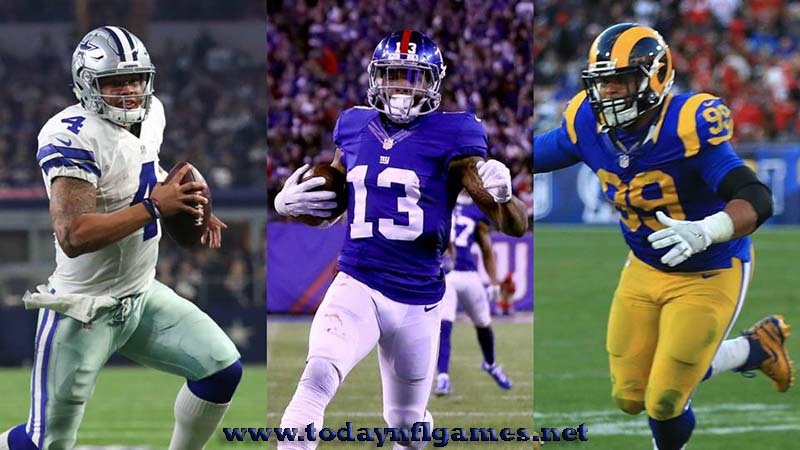 Meet the new Russell Wilson in terms of a team getting cheap, immediate results from the game’s most important position. Jerry Jones might as well start backing up the Brinks truck and get the Cowboys’ salary-cap prepared to properly compensate Prescott in a couple seasons.

Donald has good reason to be unhappy about not getting his new deal yet. He’s the face of the franchise, much like J.J. Watt has been for the Texans. The only difference is Donald has been healthier and more productive of late, taking the true title of “best defensive lineman in the league.” Donald deserves Watt money, stat.

Johnson is in for a monster raise soon, and he can look to franchise-tagged second-rounder Le’Veon Bell for some inspiration. The third-rounder from 2015 is already the league’s best all-around running back, a special talent in the Marshall Faulk vein.

All the focus has been on teammate Odell Beckham Jr.’s worth to the team, but Collins, the young heart, soul and dominant playmaker on defense — now the Giants’ better side of the ball — should have eyes on Earl Thomas- and Eric Berry-type money soon. He was an absolute second-round steal.

OK, but we’re certainly not leaving OBJ off this list, either. With Eli Manning struggling of late, just imagine what New York’s passing game would be without Beckham as the straw stirring the drink. In an era full of first-round wideout whiffs, Beckham has done things few have to start a career at the position.

Before Jones puts away a small fortune for Prescott, he needs to take care of Martin. Interior offensive linemen lesser than him have enjoyed cashing in during free agency. The best guard in the league deserves the most guard money.

Howard is right there with Johnson, Ezekiel Elliott, Jay Ajayi and Melvin Gordon in the new wave of top-flight running backs. He’s pretty much already what Matt Forte was for several seasons in Chicago. It’s sad that Howard has to see Mike Glennon and Mitchell Trubisky get so much in 2017 while he is the only established force in the offense.

Hill had a terrific rookie season as a returner, receiver and rusher, bringing some much-needed dynamism to a predictable Chiefs offense. He didn’t waste time reaching Pro Bowl status, and in Year 2, he’ll also serve as the team’s No. 1 wide receiver in what behind him is a very shaky corps without Jeremy Maclin.

Miami has kept trying to upgrade at wide receiver for Ryan Tannehill. While others have had issues, from the get-go, Landry has been a premier possession receiver with great hands and dangerous burst, and that’s before getting to what he’s meant to the team in the return game. He won’t get paid like Beckham, but he will still out-earn his second-round status.

The Titans are the only team that can challenge the Cowboys for the best offensive line in the NFL. Although rookie right tackle Jack Conklin got plenty of buzz in 2016, Lewan quietly settled in as a dominant blindside bookend for Marcus Mariota. Now he needs elite left tackle money to match.

Khalil Mack is doing much better before his bigger deal, but Barr, who has done everything in Mike Zimmer’s versatile, linebacker-friendly scheme, could use a significant bump. There’s not much he can’t do as the backbone of the defense.

In relation to OBJ, there has been limited attention given to the fact that Evans was the better wide receiver last season and also has the higher 2014 draft status. He should hope that Beckham gets the Giants to give in, because then he can justly ask for more.

Freeman is a pending free agent in 2018. He has risen well above his fourth-round status with his consistent excellence as a rusher and receiver the past two seasons. Atlanta seems to know his new high value, too, and it’s likely that even with Tevin Coleman, it locks up its more indispensable back.

Butler was a top-five cover corner in the league last season, unlike new teammate Stephon Gilmore, who got signed away from the rival Bills for $31 million guaranteed as part of a five-year, $65 million deal. There was no reason for New England, with tons of cap room, to move Butler, but rather take advantage of one more cheap year from the Super Bowl hero before he likely walks for megabucks elsewhere.

While Collins has had more immediate impact as the better safety product from Alabama, Clinton-Dix has found his own playmaking groove in Green Bay’s secondary. The Packers have drafted a ton of defensive backs of late, but Clinton-Dix has been the best bargain regardless of round.